Why would anyone go to the press and tell a story that made no sense whatsoever? Experience shows that deliberately seeking to make yourself a laughing stock is one of the rarest of human motives. For a bit of fun? Hoaxes like that follow a pattern. Usually they are inspired by something strange already published - say a bigfoot or a flying saucer. That is the impetus for some smart Alec to come up with a tall tale on the same topic. The idea is to produce something halfway plausible - something which will be published - so that you can sit around with your friends, laugh, and disclaim: "Would you believe? They actually fell for that baloney!" But producing something completely over the top out of the blue is usually not on the agenda. In any case, after three years, when everything has been forgotten, it is unlikely that somebody completely different will go to a different newspaper and relate a story arguably similar.
Or perhaps something which made no sense really did visit Sydney, Australia half a century ago.
If you look up Narrabeen Lagoon, or Narrabeen Lakes on Google Earth you will see that it is situated at the far north of Sydney next to a national park. The area was even less built up back on 3 April 1968, when Mrs Mabel Walsh was driving next to it along the Wakehurst Parkway with her nephew, John, heading for the beach at Newport. It was about a quarter past one in the afternoon, and they both happened to see a strange creature standing in shallow water. As Mrs Walsh was quoted in the Sun of 5 April:

"It was a bit over 4 feet [120 cm] tall, with dark grey, tough leathery skin, like an elephant's. It had small front legs and walked on its hind legs which were thick and round like an elephant's. It ambled out of the lake and ran into the scrub. It had a strange shuffling walk, but was quite fast. It shocked me. It was a peculiar looking thing. I've never seen anything like it. We saw it only for a few seconds. I stopped the car,  but had to wait for traffic to pass before I could back up. But the thing had gone. We were in a hurry. We wanted to have a swim.Then I had to get John to the airport and go home for tea before going to gemology classes. I didn't have time to call anyone to check on it. I didn't notice a tail or ears, but it had small eyes and smaller front legs or arms. It's head reminded me of an anteater's. Its trunk was rigid, squared off at the end and stuck down and out at an angle."

Not something you'd make up, is it? I took this report from a typed 1976 catalogue of Australian CE3 cases by Bill Chalker and Keith Basterfield, the country's most prominent ufologists. They agree that there was no actual connection between the creature and any UFO, except that there were a rash of minor UFO sightings around Sydney a fortnight later.
They also cited another Sydney newspaper, the Sunday Mirror of 25 April 1971. A woman was awoken by a terrible gurgling sound, but saw nothing. However, two fishermen were out in a boat when they saw, by the light of a kerosene lamp, a grey being with a trunk like an elephant's, which was walking on the water with its back legs.
So there you have it! But I can't leave this story without adding a bit of whimsy. In Germany there exists a pulp science fiction series called Perry Rhodan, which has been published in 66-page booklets, a new one being churned out every week since 1961. Here is the cover of  the issue for the last week in June 1996 ie a quarter of a century after the second Sydney visitation, which I picked up in a town called Graben-Süd. Do you think the author or artist knew something? 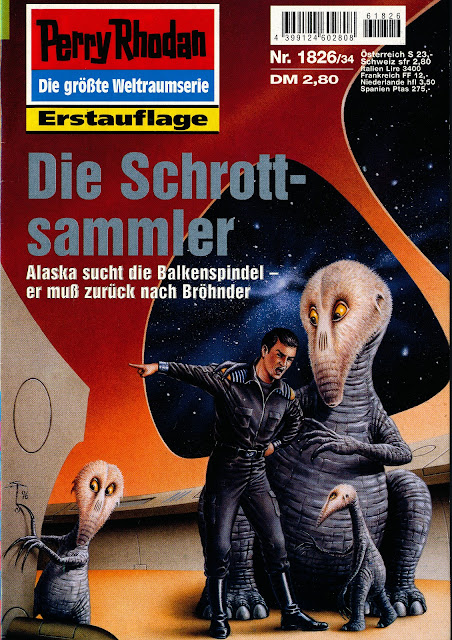