"I can't believe it," he said. "We've actually seen a flying saucer crash in front of our eyes." 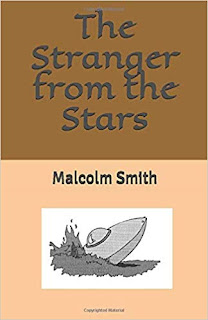 Everything else in this blog concerns events which the witnesses claimed genuinely happened. But this is different. It is my first science fiction novel.

Ever since my teenage years - approximately 55 years - I have been following the UFO scene, and I have become fully conversant with its many facets. I know what flying saucers are supposed to look like, and how they move. I am also familiar with the wide varieties of occupants observed in or near them, and even the weapons they are known to use.
It will come as a surprise to most people that the interiors have been reported innumerable times, and by people's whose memories did not require hypnosis to be revealed. The descriptions are consistent: in ever single case they describe light diffusing the room without any obvious source, and doors for which no visible join in the wall is evident. Over the decades, too, other bizarre phenomena have been frequently reported: truncated light beams, beings levitated on light beams, humanoid occupants passing through walls to give just a short list.
I had long held the intention, therefore, of producing a UFO novel which would be authentic - one for which it would be possible to say: This might have happened; all the phenomena described are known to be real.
The central theme is simple, but I don't think it has been explored before. A group of bushwalkers, or hikers, are alone in the wilderness, when they happen to witness the crash of a flying saucer. On inspection, they discover, to their amazement, that the alien pilot is still alive, but injured. What would you do in such circumstances? They feel they have no choice but to treat him like a human casualty, construct a makeshift splint and stretcher, and carry him to civilisation. They do so with mixed emotions; one is excited, one is terrified, another is full of compassion for the injured alien, and so forth. But soon they discover that there are Others interested in the alien - and of their motives and technology they know nothing.
The novel is self-published through Kindle Direct Publishing. Yes, I know the cover is crappy, but I am not prepared to hire a professional artist. It can be ordered through Amazon in whatever country you are in, and comes in two versions: a paperback and a Kindle e-book. The former I hope will eventually filter into bookstores and libraries. As for the latter, it costs the same as a large coffee, and if you don't possess a Kindle e-reader, the app can still be downloaded for an Ipad (tablet), PC, or phone. Amazon will also allow you to look inside the novel, if you are doubtful about my narrative skills.
Let me know what you think. If you like it, tell all your friends, and write a review. We first-time novelists need all the help we can get.
PS I note that a reviewer has now described it as "a gripping and imaginative tale".