A New Book on Apparitions

I started this blog with the aim of collecting reports which were in danger of being forgotten, in the hope that, in the aggregate, they might form a pattern. Well, I have now managed to see some sort of pattern - one of which I wasn't aware initially - so I have now collected it into a book. It is called Apparitions: tulpas, ghosts, fairies, and even stranger things, and it is available from Amazon in both paperback and Kindle e-book form. Much of it has already been published, but a whole lot more is new: collated from both nineteenth and twentieth century sources. With 213 endnotes, it is fully documented. 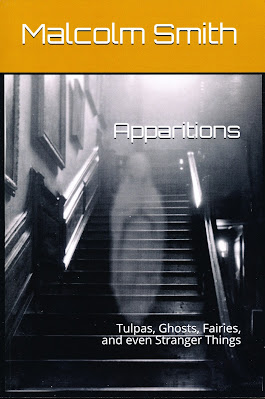 And here it is: decorated with the image of the Brown Lady of Raynham Hall, the ghost photograph most likely to be genuine.
Although "apparition" is often used as a synonym for "ghost", as the subtitle reveals, I discovered that ghosts are only one variety of apparition, and not even the weirdest. There is a parallel world of non-material beings which is only occasionally perceptible to us. They have an objective reality; they are not "all in the mind", but the mind is how we normally perceive them.
Part I deals with matters most people never hear about: apparitions of both real entities and imaginary ones which can be shown to have been induced by the mental processes of third parties. Then I go on to apparitions of living persons - almost always without their own awareness.
Part II deals with the undead. First there are the well documented cases of the dying seeing and conversing with deceased friends and relatives, including some they did not know were deceased. In some cases, the third parties attending the death bed also saw them. From there it moves to the more conventional ghosts. But one chapter involves the astounding, but nevertheless fully attested, case of a ghost seeking - nay, demanding - the prayers of the living for his release. I also attempt to outline the parameters of the phenomenon. Thus, for example, it is strange that ghosts bear the shape of the original body, but even stranger that they are always clothed (do clothes have souls?) - but not in the bedclothes in which most of them would have died. I also noted many cases where a ghost could be seen by one person but not another, but I was unable to discover the same thing with ghostly sounds.
Part III concerns the "little people" - what people would normally think of as elves or fairies. This was a subject I took a great deal of time coming to terms with. Nevertheless, the phenomenon appears to be worldwide, with so many independent testimonies that it became difficult to ignore, although impossible to explain.
Finally, Part IV deals with the "twilight zone". Here I do a quick run-through of very, very strange apparitions: merfolk, winged entities, creatures with the faces of cats or dogs, walking stick figures, and the like. I have no explanation for these, but there are so many testimonies, it is hard to reject them all. Fortunately, most of these appear to be indifferent to human beings, but I include a chapter of entities which are clearly malignant, even demonic, but some, thankfully, which might be angelic.
I urge you to acquire the book and judge for yourself. If nothing else, it will be an eye opener.
Addendum: In October 2021, I was interviewed by Wendy Garrett of Wendy's Coffeehouse about this book, and this blog in general. You can find the podcast - it is 39 minutes and 54 seconds in length - at https://audioboom.com/posts/7960496-malcolm-smith-10-17-21-aussie-fortean-blogger-writer-researcher-apparitions-paranormal
There is also a review by a member of the British Society for Psychical Research.
https://www.spr.ac.uk/book-review/apparitions-tulpas-ghosts-fairies-and-even-stranger-things-malcolm-smith (Since then, I have corrected all the typographic errors the reviewer mentioned.)
Posted by Malcolm Smith at 18:38