An Unusual Miracle in Houston

I normally disregard stories of weeping/sweating/bleeding religious paintings/sculptures. In the first place, they should theoretically be easy to fake. I say "theoretically" because I don't know of any case proved to have been faked (although I know of one which had a naturalistic explanation). And that is my second reason: I don't know of any having been proved spurious or genuine because they never seem to get investigated; even the debunkers aren't interested in them. Also - and this might be intellectual snobbery on my part - they sound like rather pathetic miracles, as if God were playing parlour tricks to impress simple people. Just the same, we need to keep an open mind. Some years ago I reported on a carved stone which regularly oozed water and changed colour over a period of 153 years. So I therefore think that the the account of the events in Houston, Texas in 1991 deserve repetition.
Tharwat Ayoub and his wife, Nahed migrated to the United States from Egypt in 1976, and found themselves living in Houston, where Tharwat worked as a vet, and Nahed ran a barbecue restaurant. Ayoub is the Arabic version of the Biblical Job, but the family were Coptic Christians, worshiping at St Mark's Coptic Church in Bellaire.
Their son, Isaac was born on Christmas Eve 1978. But the crisis came when he was diagnosed with acute lymphoblastic leukaemia in early 1989. For nearly three years he underwent chemotherapy at the Texas Children's Hospital, but cancer is virulent in the young, whose normal cells are primed to divide rapidly. By November 1991, he was given only three months to live. At St Mark's service on Sunday 10 November, his tearful mother wrote a note to God asking for a miracle, and had the priest place it on the altar. 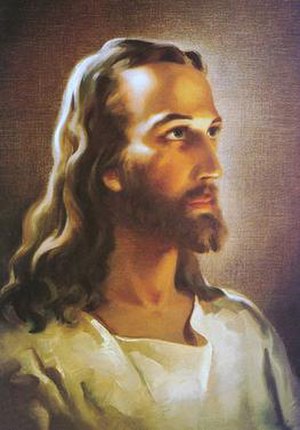 The following day, 11 November Nahed left Isaac lying in the bedroom, when suddenly he started screaming. On the wall was hanging a copy of Sallman's famous painting, Head of Christ, given to them by a family friend nine years before. Isaac had seen the eyes move. Indeed, in a televised interview, he claimed he saw the Saviour's hands move up very quickly, then down again, although, as you can see, no hands are shown in the picture. A sick child's imagination? If so, it was infectious, for his mother also saw the eyes move. More to the point, "tears" began to form over the painting.
To call them tears would, nevertheless, be a misnomer. Television footage clearly shows transparent, oily drops appearing all over the glass covering of the picture and moving downwards. To the best of my knowledge, no analysis was made of this liquid.
After that, things started to move quickly. The following day, Isaac attended his GP, Dr Atef Rizkallah for a sore throat, and the good doctor discovered his cancer was in remission. Two weeks later, he attended his specialist at the Texas Children's Hospital for a routine examination, and again no traces of cancer were discovered.
Meanwhile, back at the Ayoub house matters were developing like a snowball rolling downhill. The "tears" were being produced so copiously, that  it was necessary to pack cotton wadding at the bottom to absorb it. On the evening following the appearance of the "tears", their parish priest, Fr. Ishaq Soliman came to their house and prayed for several hours to ensure that the phenomenon was not evil.
Sometimes good news spreads very fast. Hundreds - nay, thousands -  of people appeared at the house, standing in line of ages to get a glimpse of the "weeping" picture. In December, Tadros (? = Theodore), the Coptic Bishop of Port Said was sent by the Egyptian hierarchy. He removed the picture from the wall, wiped it dry, and replaced it, but the "tears" still came. Finally, on 6 January 1992, the picture was removed and placed on display in St Mark's Church. Meanwhile, many other people sent religious pictures to be hung on the bedroom wall in place of the original. They too began to "weep". The drops can clearly be seen flowing over the glass of the new pictures. However, in case you attribute this to some clever trick on the part of the Ayoubs, the original picture still continued to "weep" once it was transferred to St Mark's.
And Isaac wasn't the only one who was healed. Fanny Elmore, who was not a Copt, but a Roman Catholic, claimed that after visiting the picture she too was cleared of cancer, despite being examined for it every six weeks.
Now, we know that cancer can go into spontaneous remission when heavy treatment gives the body's immune system a chance to strike back. However, when it happens to two separate people, and the remission coincides with another anomalous phenomenon, one cannot help suspect that something unusual is taking place.
I have no opinion on any other case of weeping religious items, least of all the "House of Weeping" in Houston, which appears to be a separate phenomenon.

Reference: A report on the incident in the Houston Chronicle of 11 January 1992 can be found here. Further information is recorded here.  However, I rediscovered the case when digitalising some of my old VHS tapes, one of which was a documentary entitled, "Miracles and Other Wonders" broadcast in 1992. Unfortunately, I have been unable to upload it to either YouTube or this blog - which is a pity, because it contains information not present in the other two accounts.
Posted by Malcolm Smith at 13:57