The Strange Power of the Ant Whisperer

When I visited Papua New Guinea in 1984 a missionary told me some second hand stories of sorcery which, on the face of it, were difficult to explain. One of these days, I thought, the whole world will be civilised, and nobody will know that such things ever happened. This is why I have recounted stories under the label of "sorcery". With a lot of tall tales "out there", my criteria have been that they are first hand reports by people who appear honest and objective, and which do not appear explicable by such obvious means as cold reading or sleight of hand. This does not, of course, mean that the witnesses' observations were perfect, and missed nothing important. With this in mind, let us examine the account of the ant whisperer.
The story was told by "T.G.S" as "Master of the Ants" in March 1950 edition of The Wide World, pp 357-360. In fact, it was on the opposite page to the story on which my last post was based. I only rediscovered it when researching the previous story. You see how easy it is for these accounts to disappear down the memory hole.
The subject in this instant is army ants, otherwise known as driver ants. Any watcher of documentaries will have heard of them: flesh-eating ants inhabiting both Africa and Latin America, they possess no solid nest, but maintain queen, eggs, and larvae in a living nest of wriggling, squirming ants, and they march in streams of uncountable numbers, devouring everything in their way. As such, they have been subject to a lot of legend and exaggeration, the prize for which goes to this passage from "Leiningen Versus the Ants" by Carl Stephenson (1938), which became the basis of the 1954 film, The Naked Jungle.


"Leiningen!" he shouted. "You're insane! They're not creatures you can fight - they're an elemental - an 'act of God!' Ten miles long, two miles wide - ants, nothing but ants! And every single one of them a fiend from hell; before you can spit three times they'll eat a full-grown buffalo to the bones. I tell you if you don't clear out at once there'll he nothing left of you but a skeleton picked as clean as your own plantation."

No, there isn't much documentation of their eating any large animal, though I don't suppose a dog tied to a post or a baby lying in a bassinet would come out unscathed. What is certain, however, is that when they approach human habitation, there is not much you can do except decamp, and once they have gone that home or village will be free of vermin.
"T.G.S" was apparently a coffee grower in Uganda. He did recall passing one column which was in the process of crossing a road - presumably he drove over it, and it wasn't two miles wide - and when he returned thirty-six hours later, it was still crossing the same road. (Shades of The Marching Chinese!)
He also recalled how, "some years ago" (written in 1950) he was camping when they entered his tent, and "made a living carpet that must have been inches thick", after which he provided a vivid description of how he escaped from the tent, but not without being bitten. In the aftermath, his head boy, the old Njogi commented that if one of them had been an "ant-man", they would have been able to deal with it. Ant-men, apparently, were people who were "brothers to the ants", and could get them to obey them. Rubbish! of course, was his initial reaction. 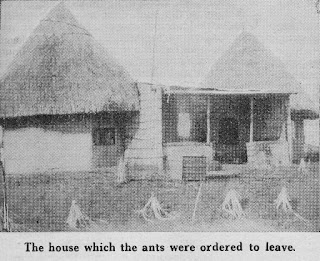 However, six months later, when he was relaxing on the verandah of his bungalow, Njogi came running to announce that a column of ants was approaching. To his horror, the author watched as countless tributaries of ants were coalescing into a single column a hundred yards wide, and heading straight for the bungalow. He knew at once that they had to leave.
Just then, his cook ran up and announced that one of the new hands was an ant-man. Up came a man of about twenty, and the author reckoned he had just enough time before fetching the car to see what he would do.
The leaders of the insect horde had just reached the bottom steps of the back stairs when the ant-man, standing on the top step, held out his hands as if in supplication, and commanded: "Go back. Go away. I order you to leave this house alone." Much to his surprise, the leading ants hesitated on the bottom step, causing a pile up in the rear. Then they slowly renewed their climb.


Again the boy repeated his command, this time with a trace of anger in his voice. Again the ants hesitated and stopped. The leaders almost seemed to be having a hurried conference amongst themselves; then they moved once more, but this time they no longer climbed upwards. Instead, they turned at a right-angle and started to descent the step to the ground, followed by all their brethren. The snake-like advancing horde played the perfect game of "follow-my-leader," every single ant scaling the bottom step and then turning to descend again.

When asked how he did it, the ant-man simply said they were his brothers, and would always obey him. No, he had no power over any other creature - just his ant brothers. Shortly afterwards he went back to his home village, and the author never met another ant-man.
I don't see why we should doubt this story. It was told quite matter-of-factly and, to put it bluntly, it wasn't good enough to be made up. Who ever heard of an ant-man before? So if someone was going to tell a tall tale, why invent an ant-man? And even if stories of ant-men abounded, the way to get one's fifteen minutes of fame would be to invent extravagant details (like the Nemesis sea serpent, for example!). Also, remember that the author provided only his initials. That's not the way to gain the thrill of seeing your name in print. Besides this, I was particularly impressed by his description of the line of ants all taking the long route of climbing the bottom step and then descending. How many people in 1950 knew that ants follow scent trails left by the pioneers?
Since the book and film of that name, the term, "horse whisperer" has come to mean someone with a more gentle, sympathetic approach to breaking horses. However, originally it referred to men, usually gypsies, who claimed occult powers over horses. If you got on the wrong side of a horse whisperer, for example, he could make sure your horse would never walk past a certain post or gate until you gave him satisfaction. But he did it, not by means of occult powers, but through a knowledge of natural substances whose smell was repugnant to horses but undetectable to humans. Did the ant-man have a similar knowledge with respect to army ants? And if so, how did he muster the resources at short notice?
On New Ireland, in Papua New Guinea, there exists a practice known as shark calling, or summoning mako sharks. You can find a number of videos of it on YouTube, but it is apparently dying out. I watched a documentary about it on Australian TV in the 1980s, and was amazed by the results, but when the same team returned ten years later the success, although confirmed, was not spectacular, and the narrator commented that their power was obviously fading.
As I said, one day the whole world will be civilised, and no-one will believe these thing really happened.
Posted by Malcolm Smith at 03:37

Email ThisBlogThis!Share to TwitterShare to FacebookShare to Pinterest
Labels: sorcery