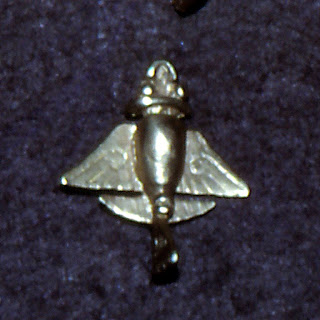 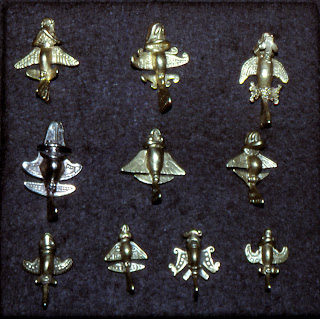 Point no.1: you may notice a distinct absence of any means of propulsion - no propellers and no jet engines (though you would hardly expect the latter if the cockpit is open-air). All right, it might have been a glider - although sweep wings would hardly be likely to provide much of a lift. But the real issue is the blythe assumption that is is unique - standing in slendid isolation, without anything similar to lend it context. I don't know where von Däniken got his photograph, but I can tell you where this one came from. I took it myself in 1982 - in the Gold Museum at Bogotá. And I took in order to illustrate what I am now about to reveal.
Here is the full sized photo. You will notice that, although the most extreme representations bear a plausible simulacrum to a propellerless 'plane, the others fail the test. In fact, they are simply stylized birds. No, I don't wish to claim to have discovered this by myself. I was notified of it when an exhibition of pre-Columbian gold from the same Gold Museum arrived in my home city four years before - and the information sheet on the Tolima specifically stated:


The combination of bird and animal features in the small ornithomorphic [ie bird-shaped] pendants has aroused special interest because of their resemblance to aircraft.

Stylized animals and birds were a feature of pre-Columbian goldsmithing. I could show you a photo of stylized bats used as ear pendants by the same Tolima Indians. However, I prefer to direct you to the art of the Taironas, who lived up north by the Carribean coast. They had a penchant for stylizing frogs, with swollen bellies to serve as bells. They were also keen on the jaguar, whose head was often combined with the bodies of other animals, usually reptiles, and frequently doubled. 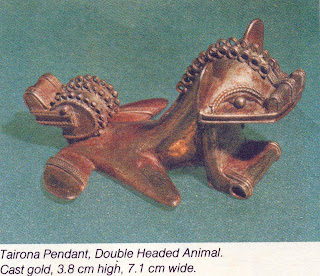 Here is an example of a very common motif. Most people would see this as one of the aforementioned chimeras. However, to more open-minded viewers it might suggest a flying saucer mascot, accidentally left behind when its "chariot" returned to whatever Ásgard   von Däniken's gods hailed from.