The Sweating Cross of Madras

The latest news is that the water dripping from a crucifix in a church in Bombay (I refuse to call it "Mumbai") was found to have resulted from a blocked drain , which caused water to ooze into the wall, and then the wooden crucifix. This is the first time I have heard of one of these dripping/weeping/bleeding crosses/statues/icons being properly investigated, let alone debunked or confirmed. Personally, I seldom show much interest in them. Not only are there many ways such phenomena could be produced, either naturally or by artifice, but they always appear to me to be rather pathetic miracles. It is as if God is using simple tricks to impress simple people. (But then, I might be guilty of intellectual snobbery. After all, God is just as concerned with the simple as with the sophisticated.) In any case, it reminded me of a more complex phenomenon also reported from India. It is an oldie, but goldie, and since it is highly unlikely you will read it anywhere else, I shall publish it here.
It is certain that Christianity was introduced to India in the earliest centuries, and the tradition that it was brought by the apostle Thomas cannot be discounted. More problematical is the tradition that St Thomas' Mount at Madras (I refuse to call it "Chennai") is the site of the saint's martyrdom. It does, however, appear to have been the site of a church since at least the sixth century, but there was nothing left of it when the Portuguese erected a tiny oratory to the Virgin Mary there in 1523. In 1547, they decided to replace it with a full-sized church. While digging the foundations, they found a stone about the size of a millstone and, on turning it over, discovered on the reverse a beautifully carved cross surmounted by an inscription which nobody has been able to decipher. Also, something on it was interpreted as blood. It was therefore placed on the altar, and after that the fun began. 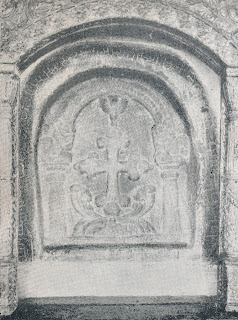 
[I]n the year 1558, on the day of the feast -Expectation of Our Lady, December 18th - when the singing of the Gospel of the Mass was started, the stone of the cross began to turn black in colour and to distill water in such large quantity, that those who so willed, soaked their linen and rosaries in it. The Vicar, Gaspar Coelho, who was saying Mass, after the Communion was over, dipped a purificator into the water and placed it in the chalice; the next day he found it as it were soaked in blood and showed it to the people. This time, the miracle lasted for four continual hours; when it came to an end, the stone turned a very white and resplendent colour, which fact gladdened all present; and drying itself slowly, the stone lost the bright colour and turned its natural colour, blackish.
Thereafter, every year and on the same day, when the Gospel of the Mass was begun, the miracle was renewed, the sweat beginning from the top of the cross downwards and so much water gathered up over the border that there was Decree from one of the Bishops of Cochin, given during the pastoral visit, ordering that all the water be gathered up into a special vase to be administered later on to the sick as a holy remedy for their infirmities.

A Father Sylvester De Souza witnessed the phenomena in 1689 and 1695, and stated that, on 18th December of the latter year, the large congregation shouted out "Miracle!" during the sermon. On turning around, the preacher saw the  black stone turn reddish, then brown, then a dazzling white, before becoming intermittently clouded. So much water was then exuded that it trickled down over the altar, and the Vicar was able to soak the handkerchiefs of the congregation with it.
Apparently, quite a few unbelievers - Protestants and atheists - scrutinised the church, even to the point of climbing onto the roof on the lookout for chicanery, but found nothing. Nor was 1558 the first appearance of the phenomena. It originally took place in 1551, and certainly in December 1557, 1558, 1561, and 1581. Although 18th December was the regular date of its appearance, in 1581 it also occurred on the first Sunday in Advent. Often it was observed in the early hours, before the church was opened to the public. The last record was in 1704.

So there you have it. I'm not saying it was a miracle, and I'm not saying it wasn't. But any explanation will have to  cover, not only the water, but also the change in colour (wetness can make a light stone look dark, but seldom the reverse), and the specificity of the dates. Perhaps the last might indicate hoaxing, but one would still need to explain how it was done, and how it continued for 153 years. Or else the story had changed so much in the transmission that it had become unrecognizable. Since the case has been cold for the last three centuries, we will never know.

Reference: In the Steps of St. Thomas, by the Rt. Rev. Herman D'Souza, 3rd edition 1972, Madras. The first quote was from A. de Gouvea, Iornada do Arcebispo de Goa, Coimbra, 1606.
With respect to Father Sylvester De Souza's account, the book's references become confused at this point. However, it appears to come from Guy Tachard, S.J., Lettres édifiantes et curieuses (1781), quoted in Our Lady of Mylapore and St. Thomas the Apostle, by Msgr. Alberto Pereira de Andrade (1956).
Posted by Malcolm Smith at 03:24