As a lark, my brother, then in his late teens, visited a fortune teller. After hearing the usual run-of-the-mill predictions such an exercise entails, he asked how he was going to die. The fortune teller replied that she would prefer not to deal with such a subject, but Warren insisted. So she told him he would die at the age of 25 (or 22, I forget which) in the armed forces of a foreign country, and would leave behind a widow and two children. Warren laughed as he told that story, but what happened? He lived to be 52 years old, he had only one child, and he never got near any armed forces. So much for the lousy prediction!
Seriously, you would have to be pretty stupid to listen to a fortune teller. Even if you accept the possibility of clairvoyance, the question still remains: how do you know this fortune teller is any good? Does she (it is most often a she) have a certificate from the Psychics Academy, guaranteeing that she had an 80% success rate for periods up to twelve months, when face to face with the subject, or handling one of his possessions? The field is wide open; anybody can call herself or himself a psychic. The best that can be said of most of them is that they are adept at cold reading, and when the client wants to believe, their performance can be impressive.
Just the same, one occasionally comes across something unusual.

Sir Douglas Bader (1910 - 1982) was one of the heroes of my youth. Courtesy of Paul Brickhill's popular biography, Reach for the Sky (1954), we learned how Bader lost both legs in an aeroplane crash in 1931. Despite being rehabilitated with a pair of artificial limbs, and learning to fly again, he was invalided out of the air force in 1933. It was in 1935 or 1936, shortly after his marriage, that the following incident occurred. I shall quote from p 132 of the 13th (1961) hardback edition of Brickhill's book:

One day she [his wife, Thelma] lured him into going to a fortune-teller, getting him, after his first grumbles, to treat it as a joke. He went into a dark and dingy room and shortly a wrinkled old woman shuffled in, took his palm and surprised him by saying that he was destined to have trouble with his feet and legs.

Since she arrived after he had entered, Bader, of course, knew that she hadn't witnessed his limp. Nevertheless, it is possible her associate had told her. Just the same ...

She added: "There is a period of difficulty in front of you, but you will be a great deal happier in due course. You will become famous and be decorated by your King."

Viewed objectively, this must have appeared a really outrageous prediction. Nevertheless, it came true. In 1939, he was able to re-enlist in the R.A.F., where he joined "the Few" in the Battle of Britain, as a fighter pilot running up a formidable score of enemy "kills", and an equally formidable score of medals for bravery, followed eventually by a knighthood for his services to the disabled. But the clincher to the story, which was what stuck in my mind from the day I first read it as a boy, was the following passage:


Then she made him sign her book which she kept for people who were going to be famous. In it she showed him the name of David Beatty, who had signed as a sub-lieutenant in 1904 and laughed when she told him he was going to be a famous admiral.

An autograph book for clients who are destined to be famous! It's a nice touch, don't you think?

July (presumably named after his birth month) was a South African  witchdoctor, with a practice east of Tzaneen in what was then the Transvaal, but is now Limpopo province. He was in his early seventies in 1954, when a Mr Cave Bennett introduced him to the world, because:


July is an old friend of mine; I have known him since I was a child, and speak his language fluently. He and his family always give me a hearty welcome whenever I visited his kraal. 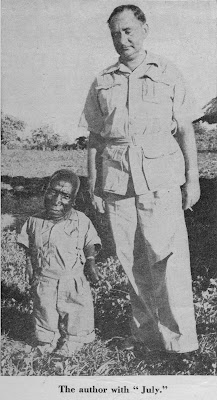 From this photograph you can see why he was unusual enough for further discussion: he was an achondroplastic dwarf. Allegedly, he stood only 30 inches high, which I think is a bit of an underestimation - unless Bennett himself was less than five feet tall. Be that as it may, his wife was of normal stature but, because achondroplastia results from an autosomal dominant gene, his three children (aged 17, 15, and 12) shared his trait. (Bennett provided photos of them as well.)
July was naturally adept at "throwing the bones": the traditional collection of bones, pebbles, and other paraphernalia used by South African witchdoctors, but he assured his white friend that he really didn't need them; they were essentially props. This, I think you will find, is the mark of the, if not necessarily genuine, at least sincere psychic. Those who, rightly or wrongly, believe they have the gift of clairvoyance, use crystal balls, tea leaves, even bones, as merely aids to focus the mind, while they await a message from their subconscious.
According to Mr Bennett, July had the uncanny ability to recount a person's medical history, dating back to childhood, merely by looking at him or her. To one young (white) lady, he said: "My word! When you were a little girl you must have suffered terribly with nose-bleeding! And I am afraid it still worries you occasionally." He was right.
To another of Bennett's friends, he commented: "You find your left hip quite comfortable out in the open here, don't you? There's none of that nagging ache you get when you sit indoors?" It was all true - although Bennett himself knew nothing about it, nor did it show in his walk. Nor did Bennett know that his friend's wife in the big city was expecting a baby, until July announced it, and correctly predicted that it would be a girl.
Well, these are just anecdotes. We don't know the full details, but it is hard to see how the witchdoctor could discover the medical history of a couple of completely strange white visitors. But it starts to become uncanny when another of Mr Bennett's friends was introduced to him. "Morena, Bennett," said the little man in his own language, "tell him anything you wish. He has no future!" Six months later he was dead.
Cave Bennett was a  confirmed believer in July's powers, but he could never persuade his friend to tell him his own fortune. No doubt, if you really can see the future, dealing with your friends and relatives is going to be an problem.
Reference: Cave Bennett: "The world's oddest witch-doctor", The Wide World, Jan 1954, pp 141-3 (January 1954 in Australia and New Zealand, December1953 in the UK.)
Posted by Malcolm Smith at 22:31

Email ThisBlogThis!Share to TwitterShare to FacebookShare to Pinterest
Labels: ESP